3DMIN is happy to announce that PushPull made it to a third place at the 2015 Guthman Instrument Competition. Thanks everyone for believing in us and stay tuned for updates!

Below you can watch the whole Guthman competition at GeorgiaTech. The PushPull performance by Amelie Hinrichsen and Dominik Hildebrand Marques Lopes starts at about 10:23:00.

3DMIN was well represented at the 2014 joined ICMC/SMC conference. Apart from a PushPull performance, we presented two posters (an overview on the aims of the 3DMIN project and a paper on Influx) and were associated with the activities of the Modality project (a workshop and a poster presentation). 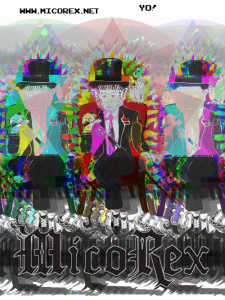 On Fri, 11.7.2014, 13h, the same day as their performance at NK, Mico Rex will give a public artist talk in the scope of 3DMIN and the computational art class of UdK Berlin:

From their webpage (we had to ommit the blinking, check it out yourself):

Mico Rex is an experimental electro-pop mexican duo founded in 2010 by Ernesto Romero and Jorge Ramírez, pionners in live programming in Mexico.

Described as sticky, melodic and danceable, within a kaleidoscope of styles such as 8bits/glitch, oldschool/electro, romantic style,punk, geek, breakz, fresh, bolero, vocal, finura, 80’s from the future!!!

The live performance is a combination of structured pieces and improvisation with code accompanied with voice and home-made controllers in pain.

The sound design, structure and composition are made upon programming code for hardware and software developed by the group members themselves. They consider code as the most flexible media for live electronics performance.

Modality is a toolkit to improve and facilitate the use of digital technology within sound art and music, based on the audio programming language SuperCollider.

Dominik Hildebrand Marques Lopes, Amelie Hinrichsen, Alberto de Campo and Till Bovermann will attend the next Modality meeting held at STEIM Amsterdam between 30.3.2014 and 6.4.2014. It is accompanied by a public workshop and a concert at OT301 on 5.4.2014. Welcome!

On march 7/8, Alexander Förstel and Hauke Egermann gave a talk on the subject of sound embodiment at the annual “Group Meeting Systematic Musicology” in Kassel, Germany. The talk included a short introduction of the 3Dmin project and was well received. We are looking forward to participating again next year!

It was live and we were part of it! For the twelfth Hybrid Talks we embarked on the quest for new performative instruments, which make music into more than simply an organized form of sound-events. END_OF_DOCUMENT_TOKEN_TO_BE_REPLACED

Within the research project new electronical instruments will be developed together with students from product design, generative arts and soundstudies. Inspired by invited musicians and their technical set-ups solutions may be integrated in existing instruments or even new instruments will be generated. Since the project is cooperation based working within groups, transdisciplinary work flow and getting into the spirit of the creative works borderland is in focus.