In September 2014, Amelie Hinrichsen and Till Bovermann took part in the Choreographic Coding Lab, organised by Jeanne Vogt, Florian Jennet and Scott deLahunta. During the week-long workshop, they worked with dancers/choreographers Joshua Rutter, Lea Pischke and Oliver Connew, trying to find their approach to combine the diverse fields of choreography, programming, dance and sound.

The two studies, Mitbewohner and Best dream ever, are their (first) outcomes, condensed from intense discussions on the respective fields and their relation to each other.

Three wooden sticks connected to a sculptural kinetic object. An experiment about collaboration, imitation and signification. A sound engine is influenced according to continuous measurements of the angles between the sticks as well as by an accelerometer attached to the middle stick. This study was also performed at retune festival. 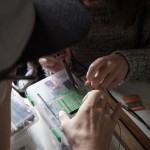 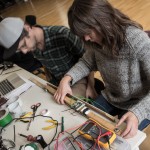 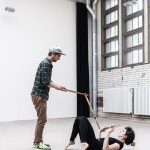 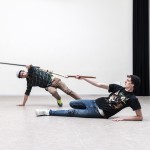 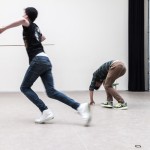 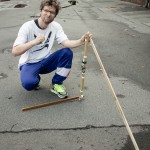 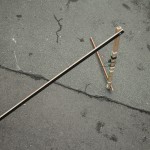 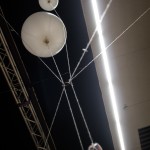 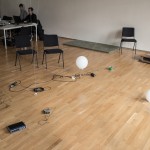 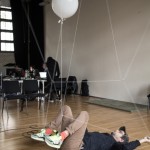 This is the second approach on working with an architectural structure in space, in which we tried to introduce a quality of movement contrasting to Mitbewohner. Six strings connected through three metal rings create a network of wool. Three of the threads are connected to helium-filled balloons, the others hang from the ceiling and have a weight on their dangling end. The dancer connects hands and feet to the structure. Movement of her body induces movement to the system; creating a dream-like imitation and adaptation of the body movements. The vibrations of the threads are amplified, altered by vowel-tuned filters, and finally diffused into the architectural object. An FM feedback network complements the breezy athmosphere of the almost architectural space.

In general it was mentioned that „having an object, made it less awkward“ to interact and control sonic elements (i.e. integrate technology into dance practice).

We’d like to thank Jeanne Vogt, Florian Jennet and Scott deLahunta from the Choreographic Coding Lab (as well as Motion Bank). The combination of SuperCollider, X-OSC, and the Influx system by Alberto de Campo for the prototyping process made the programming a breeze.