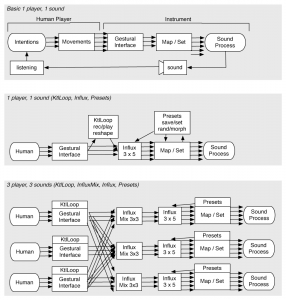 Influx is part of a research agenda that explores concepts of Meta-Control. Generally speaking, the idea is to extend the range of choices for “navigating” evolving musical processes. E.g. to what extent does one want to apply direct control over certain parameters (like volume, pitch, timbre, etc); does one want to remember sound situations; does one want to record performance movements and reference them later as material for the evolving performance.

Influx in particular explores the idea of influencing processes instead of directly controlling them. Here, one can continuously choose between the safety of known mappings (being combinations one has stored earlier) and the risk of creating new control combinations while playing, thus jumping into the unknown. Possible Scenarios for Influx include:

Fan in /Fan out

Very often one plays with rather few controls (e.g. sliders and joysticks on a controller) and with sound processes that have many rather too many input parameters. Here, rather than mapping one control directly to each parameter, one lets each the few control parameters influence every one of a large bundle of process control inputs by some random amount. This is a quick way to jump into new areas in the possibility space of the process, which might be interesting to explore and maybe keep.

By random variations of existing mappings, one can gradually introduce “entanglement” between params by adding small random deviations. This introduces more surprising behavior from the instrument. By going back towards a known mapping, one can also “disentangle” the control behavior.

Relative – playing around a known preset

In performance or exploration, one can store good-sounding situations, and use them later: Such a known location (e.g. a stored good preset) becomes the center of the control range, and Influx can be used to play relative to this preset. Here, zooming in allows very subtle explorations of shadings within a known good zone, while zooming allows wider movements which will move into unknown sound zones.

A paper on Influx was presented at ICMC/SMC 2014.